Rummi is an excellent freeware computer version of Rummikub, one of my most favorite multiplayer board/parlor games and currently the third best-selling board game in the world according to Lemada, the official publisher (the game is marketed in the U.S. by Pressman Toy). In addition to being Israel's #1 export game, Rummikub is currently available in 24 languages and sold in 48 countries around the world. Rummi allows you to play the game against your computer at different difficulty levels.

If you have never played Rummikub before, it's best to think of the game as a cross between Poker and Mah Jong (the multiplayer game, not the solitaire tile game): your goal is to be the first player to eliminate all the tiles from your rack by forming them into sets of "runs" (set of three or more consecutive numbers) and "groups" (set of either three or four tiles of the same number in different colors). Along the way, you must try to keep as few points in your hand as possible so that you won't lose too much when someone else clears the rack (called a "Rummikub") first. The number 1 is always played as the lowest number (i.e. it cannot follow the number 13), and there are two jokers that, similar to blank tiles in Scrabble, can be used for any tile in a set. These jokers have a hefty penalty value of 30 if they remain in your hand at the end of the game.

Rummi plays a good game of Rummikub, even though it's disappointing that you can't play a 3- or 4-player game or against friends over the Internet (although the author announced that a more updated version will be released in 2002 as shareware). The graphics are clear, and the computer AI is quite good. Overall, Rummi can't beat the real thing, but it's a good choice if you feel like to play the game, but can't find enough friends to pay it with. 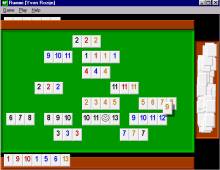