POWER from IBM is an interesting boardgame-style turn-based wargame that challenges your strategic skills against your opponents in an abstract race to rule the world. The objective of the game is to defeat your opponents in a tactical war by capturing their Flag. Upon capturing an opponent's Flag, your opponent is removed from the conflict and you collect all of their military equipment for your own use. Here's the synopsis of the game from on-line help:

"Unlike many wargames, battles in POWER don't usually involve much destruction of military hardware; your main goal is to capture as many enemy forces as you can. By acquiring these captured opponent's tanks, planes, ships and infantry, you can eventually build up enough military might to overpower all who try to resist you.

You are assigned a country along with the military forces necessary to defend your country and to attack opposing countries. Your mission is to defend your country's Flag while trying to capture the Flag of your opponents. The battles will be divided into distinct rounds of combat, with the entire conflict lasting two hours or less. During each round all opponents simultaneously prepare their commands (strategy) during a planning round. You are allowed to issue up to five commands during these planning rounds to defend your territory and/or to attack your opponents. The idea is to deploy your infantry, ground, air, and sea forces into your opponent's countries, overthrow any resistance they offer, invade their Headquarters, and capture their Flags. The planning round is either one, one minute and thirty seconds or two minutes in length, depending on the value you set during game startup."

Overall, POWER is a fun abstract game with enough fun innovations that is well worth a look. Too bad the game lacks the complexity of board games like Axis & Allies to make it truly replayable. The extremely challenging computer AI at the highest difficulty level more than makes up for it, though. Well worth a look if you are die-hard wargamers. 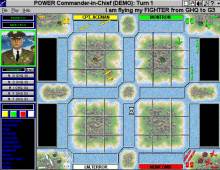