Poker Solitaire is a great PC version of the fun solitaire game of the same name, sometimes called Poker Squares, which rewards both lucky guessing and accurate calculation of odds. Unlike most solitaires, where you're working with a full deck, and have the task of re-arranging the cards into some preset order, in Poker Squares you're given half a deck, and the object is to put them in the best order, using standard poker hands such as three of a kind, full house, etc. The better the poker hands you can create, the better your score will be. You will move cards one at a time from the stock and place them into a 5 x 5 grid so that each of the rows, columns, and diagonals forms the best possible poker hand.

Poker Solitaire requires a good degree of skill to get consistently good scores, though even the best moves can be ruined by a stretch of bad luck. Straights are the most difficult hands to create, because they require you to give up a chance for safer hands, such as pairs and threes of a kind. You'll often get the first three cards of a potential straight, then be tempted to give it up for a quick payoff. But if you hold firm, your faith will be rewarded at least some of the time. This computer version is nicely done, with attractive graphics and a user-friendly interface. If you enjoy solitaire games, this is one old game well worth your time. Recommended! 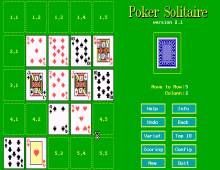