The best way to describe Pentagrama is probably to say it's your average star-shaped, wooden peg solitaire game, except with animated soldiers instead of pegs. In this game, you are crowned a King and commander of your race, which occupies one vertex of a star-shaped world. Four other races occupy the other vertices, but only two of those are hostile to you - these are the ones that occupy the two opposite vertices of the star. Your objective is to kill the leaders of the two hostile races. The same objective applies to computer players as well, because two races that occupy opposite vertices to each race are automatically considered enemies of that race. When your units encounter enemy units, the game zooms into the action where you will watch the cartoony units fight it out in simple rock-paper-scissor style (replacing it with elements e.g. wind, fire, water, etc.) The 3D engine features excellent, crisp graphics, and the user interface is easy to learn. The game includes a full-fledged tutorial, and the ability to host and join LAN games to play agsint other human players.

Although the full game with 5 human players can take hours to finish (especially if your friends are as good as you are ;)), a normal game against computer opponents is considerably shorter. The unique shape of the battlefield makes for interesting strategies, although it would be nice if the actual close combat were more complex. As it stands, though, Pentagrama is a fun and accessible wargame that strategy gamers everywhere should enjoy. 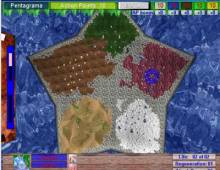