Pax Imperia: Eminent Domain is a competent sequel to Pax Imperia, a classic 1993 Macintosh-only 4X space strategy game. Although the original Pax Imperia is an ambitious game that came very close to being the 4X game that got everything right, the sequel unfortunately falls far short of that aim. Maury Markowitz' excellent summary of the game's tortuous development says it all:

"After Pax was released the designers moved on to form their own company, Heliotrope Studios. There they started a sequel to Pax that was supposed to run on both the Mac and Windows platforms, to be released by Blizzard. First it was late, then it was later, and then it was really late. After four years when it looked like the game was finally getting ready to ship in '97, word came down that it was going back into the shop to change the graphics to appeal to the new standard for game interfaces (uh-oh) and that in order to get it out on time it would be Windows only.

When it finally shipped in '98, Pax II, the interface was indeed gee-wiz, but at the same time it was harder to learn because it was no longer based on the OS's own GUI. It also removed many of the features from the original that made it unique. For instance the map was now connected by "wormholes" meaning that you could only travel from system to system, thus removing one of the cool things from the original where you could fly to any point. On the other hand they did manage to get species design down cold."

So what did Heliotrope manage to retain from Pax to this sequel? Fortunately for us, quite a lot of good stuff. First, it's one of the most customizable 4X games you can find today. You can customize not only galaxy size and characteristics, but you can also design your own races using an excellent interface. Ship design, unlike cumbersome interface of MOO2, is quick and painless. Another high point of the game is the innovative "pausable real-time" combat system. As in actual gameplay, you can pause the battle at any time to give orders to your fleet from the 2D battle screen. The huge number of weapons and upgrades you can make to your ships make these battles a lot of fun. Another thing I like about the game is that you can research many technologies simultaneously. This means you can make a powerful fleet quite quickly, although refitting ships with new technologies is tedious, and there is no way to see what technologies are installed in your ships from the tactical combat screen.

Where Pax Imperia: Eminent Domain pales compared to the likes of MOO is all the other features that have been removed from the original, probably to meet the tight release deadline. The economic model is sound and the computer AI quite competent, although the lack the personalities of aliens in MOO. Diplomacy is competent, but some features are sorely lacking. For example, you can do "joint research" and "share information" with your allies, but you cannot direct espionage actions at specific locations. You also cannot tell who is at war with who - the only way is to look at the action as it unfolds.

All in all, Pax Imperia: Eminent Domain is a competent game that is definitely above-average as far as 4X games go. Considering the high pedigree of its predecessor, though, it's disappointing - this is a game that could have been THE standard for 4X genre instead of MOO, if only the design team had spent more time to fine-tune existing features of Pax Imperia and improving upon them. As it stands, Eminent Domain is a fun combat-oriented 4X game that is worth a look, if you prefer to conquer galaxies by brute force rather than shrewd colony management. The real-time battles are fun, and the game is customizable enough to keep 4X fans happy for some time. Recommended, but not a Top Dog. 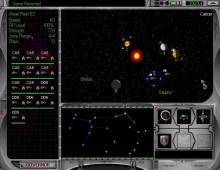 People who downloaded this game have also downloaded:
Imperium Galactica, Imperialism 2: The Age of Exploration, Lords of The Realm 2, X-COM: Apocalypse, Magic: The Gathering