Imperium Galactica is a unique and commendable effort from Digital Reality that tries to blend 4X strategy genre with a real sci-fi story and adventure-genre-style plot development. The result is a hodgepodge of features - some obviously better than others - that don't mesh as well as it should. Still, a very well-written plot that is tightly integrated into the game makes it worthy of our "top game" tag, even if the colony management gets a little bit tedious in the long run. Some excerpts from this critical review at Adrenaline Vault should help make up your mind about this game that is very different from its sequel (also on this site):

"Imperium Galactica is actually not the type of space strategy game that fans of that genre have come to expect. It is as much an adventure game as it is spaceploitation. There is a definite, narrative story, and dozens of cutscenes that help to progress the action as you grow in rank and gain more control of the fragile human empire. This storyline is both Imperium Galactica's greatest strength and its worst weakness. Yes, you'll feel compelled to see what happens next, but this linearity also kills any replayability the game might have had.

Central to the gameplay of Imperium Galactica is a unique ranking system. As you increase in rank, you'll be given different sectors of the galaxy to command, more game options, and increasingly difficult tasks to accomplish. You start the game as a lowly Lieutenant assigned to get the war-ravaged colony of Achilles back on line. You'll also have command of a destroyer and will be called upon to defend your little pocket of space from pirates and the like. A promotion to the rank of Captain means command of a better ship, the cruiser. This is also when you gain access to the Production screen, where you can develop technologies, specifically spacecraft, weapons, and starship equipment. This is the first real step into all Imperium Galactica has to offer, and the first time you'll really have to think about effective management. Captain rank also has another interesting benefit. You'll now be able to visit the "Local," the ship's lounge, and talk to members of your crew. It is at this point it becomes apparent that Imperium Galactica is more than just a space strategy game. It is also a carefully scripted adventure, and draws you in more and more as you play, much like Wing Commander III.

At Commander rank, production takes on a whole new depth, because you are also given the opportunity to research new technologies. This is also the point in the game when space combat, though certainly the game's weakest element, takes on enough depth to at least make it interesting. You'll be given command of a flagship, a real heavy-hitter that can do some serious damage and take one hell of a beating. In addition, you will now be able to select different battle strategies before combat begins, and your ships will perform accordingly.

When you finally get promoted to Admiral, two major things happen: the storyline kicks into overdrive as you get closer to an ultimate objective, and you gain access to the hard-core features that make up the bulk of most space strategy games. As Admiral, you will gain command of the mighty Flagship Thorin, a leftover from the Old Empire that is more than capable of dealing with any threat the galaxy may throw at you. But the real fun in being an Admiral comes from the increased colony options. You can now expand the human empire anywhere in the galaxy by colonizing other planets (which is actually kind of odd in this game, considering the fact that the whole story revolves around the fact that the empire got too big, and broke apart into warring factions), and make contact with alien races.

Throughout Imperium Galactica, regardless of rank, you will have to maintain the colonies under your care. This, and not space combat, is really the heart of the game. The planetary management model is excellent, and allows for real personalization. Want to use the colony as a long-range outpost? Just construct a radar telescope, and you'll increase your scan radius. Want to build a bigger fleet? Make sure you have a couple of spaceship factories. At the higher ranks, especially when you hit Admiral level and can colonize other planets, it can be quite a challenge trying to tend to the needs of every planet at once, especially when you get called away to fight a space battle.

Imperium Galactica is a strange hybrid of game genres. It is part adventure, part space conquest, and part colony management. But this mix proves to be an original and effective concoction. The progressive level of gameplay gives you something more to look forward to than just another planet to colonize, so there's always something new happening. Ultimately, it's hard to take the game seriously because of the ridiculous full-motion video and bad dubbing. But, believe it or not, this actually enhances the gameplay. It gives Imperium Galactica a sort of Saturday matinee feel, and makes the gaming universe seem that much more colorful and alive. Granted, this probably wasn't what the game's developers were striving for, but if it works, go with it! When you come right down to it, Imperium Galactica is a whole lot of fun. It is a fun, compelling space adventure game with enough solid elements to earn my recommendation. Just don't expect any replayability. Gameplay is pretty linear, and there is no multiplayer support, so you'll have to resign yourself to playing the game just once in single-player mode. All things considered, though, there is definitely room on your shelf for this unique entrant into the space strategy genre." 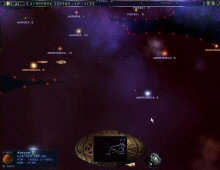