Nectaris is one of the most obscure sci-fi strategy classics of all time. If you like Battle Isle by Blue Byte, you will definitely enjoy this game. Actually, Battle Isle was very much inspired (although "copied" would probably describe it better) by the original PC-Engine version of Nectaris.

For those of you who don't know this kind of game: It's a futuristic turn-based strategy game where the objective, naturally, is to conquer the galaxy. This is no Star Fleet, though: Nectaris's hallmark is the "casual" take on the genre, with attractive graphics, ease of play, with a well thought-out interface and nicely animated combat sequences. Better yet, the game still has enough depth to keep the player's attention, as well as many details (e.g. ground Strategy fans will love this one. Too bad the PC version came out too late (six years after the PC-Engine original) to attract gamers' attention away from the likes of Master of Orion. Highly recommended for any armchair commander who just wants a quick, attractive, beer-and-pretzel game of galactic conquest. A must-have! 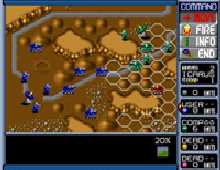