One of the most underrated turn-based strategy games ever made, MoonBase Commander is a superb release from Humongous Entertainment that would definitely have sold much better without the "designed for kids" blurb that makes the game sound much simpler than it really is. The thorough review at Frictionless Insight explains why:

"MoonBase Commander is a gloriously simple game of strategy, with tremendous character, especially given its no-nonsense approach. The premise is straightforward. You start with a hub. That unit is capable of hurling out other connected structures, which can be offensive or defensive, including exploratory towers and secondary hubs, all attached by cords. Because the cords connecting structures cannot overlap, each hub can only be linked to a limited number of other structures, so that the planet begin to look like a set of radial webs as the game progresses. Manufacturing buildings to launch takes energy, the only resource in the game. Each turn, you can spend your energy resources, alternating with other factions' hubs. You can even increase your energy allocation by placing energy collectors on the limited number of mysteriously glowing pools.

Other factions are competing with you for resources, and those factions are not always friendly. In defense or conquest, hubs can launch a variety of creative armaments and offensive structures can shoot twice as far as hubs. Weapons range from simple bombs that you lob at your foes to Electro-Magnetic Pulse weapons to deactivate structures, to guided missiles, a crawling bomb and a virus to sow mayhem. While there are some goal-oriented games (such as being the first to harness an energy pool) in the Challenge Mode, MoonBase Commander is primarily a game of elimination. If they aren't on your side, destroy them!

At first blush, the strategy seems simple. The complexity comes from the limitations imposed by cords, energy and the need to lob all of your constructs and weapons. Depending on the planet's terrain, you'll be challenged to have as many as eight structures connected to a single hub. You can, of course, build more hubs, but if a hub or cord is destroyed, all secondary structures will be destroyed (and if a hub is among them, all of that hub's structures will go). Spreading across the landscape is necessary, but you have to protect connections to your primary hub, or cords that cross dangerous terrain like water. When you do expand, or attack other factions, you propel buildings by choosing an angle for launch, and the power with which you hurl it away from your hub. Wind will alter the trajectory of your shots, so it's important to be careful when flinging high explosives. The energy limitation makes your decision to spread even more delicate. Many structures are expensive, so building another hub is the equivalent of creating seven destructive bombs, and if that hub lands on rough terrain, it might be destroyed, wasting the energy altogether.

MoonBase Commander offers a variety of play modes, including skirmish mode, in which you can compete with up to three computer opponents with ten possible levels of skill. There is a challenge mode, which lets you play each of the four factions, for four missions apiece. This is a scripted campaign which introduces the player to the game slowly, offering increasingly challenging missions. While you need to complete a mission to move to the next in challenge mode, it is relatively easy to complete a challenge with a low score, leaving you to replay if you'd like higher effectiveness ratings. The challenge campaign offers some nicely designed scenarios, but is limited in scope. That's both criticism and praise - I wanted more, because the game was engrossing enough to make me want more. Completing challenge mode unlocks the challenge maps for skirmish mode, and if those aren't enough, there is a map editor to let you construct your own arenas of conquest. Human players are the most exciting (and difficult). Unfortunately, few enough people are on matchmaking services with MoonBase Commander, such that it's difficult to start a multiplayer game unless you arrange it before-hand with some friends.

Another thing to be said is that MoonBase Commander is a slick game. Everything is well integrated, from the simple graphics to the personalities of the factions. It runs at low resolutions, with uncomplicated but effective graphics. Given the nature of the game, a 640x480 screen really doesn't detract from the fun, and MoonBase Commander will run on a wide variety of systems. The personalities of the factions and voice-overs more than compensate for any perceived shortcomings. All the factions have identical armaments, but different styles of structure and different voices to offer helpful advice. NiceCo ("Building a better tomorrow, today!) has the clean, helpful cheer of a faceless female voice announcing the next stop on a Japanese high-speed train. DeWulf Industrial ("Turning planets into energy so you can watch football") supports you with the gritty advice of a high-school football coach. The alien System 7 ("Please cooperate so that your termination will be as comfortable and expedient as possible") advises with the aplomb of a psychotic robot butler, and Team Alpha (who designed the MoonBase technology) has an advisor that sounds like a helpful cross-country trucker. The different characters of the factions give the game a charming feel that increases its longevity. The slight difference between the factions that affects gameplay is the shape of the power meters. Some groups (like DeWulf) have a meter shaped such that it is easier to track the exact power of a throw.

MoonBase Commander is a captivating and engaging game. The biggest surprise this title has to offer is that it is being marketed by Infogrames as a children's game. Certainly, children should be able to play and enjoy MoonBase Commander, but the strategic depth, entertaining presentation and bargain price tag make this game an easy recommendation." A superb game that is definitely NOT 'just for kids.' 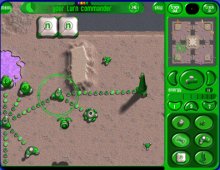