One of the best giant robot strategy games ever made, bar none. MissionForce: Cyberstorm from Dynamix is a hex-based, top-down, turn-based wargame set in the same universe as Earthsiege, an earlier Dynamix classic. You control a fleet of mechanized robots called ?Hercs,? waging war against the Cybrids. Games Domain says it all about this sadly overlooked classic:

"... the player's task in life is to take command of a fleet of Hercs and joust with the dreaded Cybrids, accumulating fame and fortune along the way. It's not all blood and guts though (especially as presumably the Cybrids don't come equipped with either). The budding Cybrid-slayer will have to do a lot of figure juggling and book cooking before he ventures onto the battlefield. When the player starts their career they are given two basic Hercs and two low grade bioderms to pilot them.

?What the hell's a bioderm?" you may well ask. Well it seems that clever old humanity realised that there was little point in putting their own lives on the line by climbing into a Herc and heading off to battle when they now had the capability to create artificial creatures capable of doing as good or better a job as man so they created the bioderms. These roll your own entities are what steers your precious Hercs into battle and so it pays to look after them.

As the player accumulates money, they can afford to spend more cash on their bioderm. Each type of bioderm has its own set of attributes, things like how well it can pilot a Herc, handle various types of weapons and command other bioderms. Another important factor is how long lived the bioderm is for even without your so called tactical mastery guiding it along, bioderms have a strictly limited lifespan.

The perceptive reader will have by now realised that without credits to upgrade their Hercs and bioderms, they are going to get nowhere in this game. How can they lay their hands on large amounts of gelt?

Basically, by completing missions. At any one time, there are nine missions available to the player. Four of these are mining missions, fairly profitable and not dangerous. Then there are four military missions, more dangerous but more lucrative. Finally, there is the Cyberstorm version of the end of level monster. This mission is a real bastard but if you complete it, you will have cleared the Cybrids from this particular solar system and can go on to the next one. There are three solar systems altogether.

[The] gameplay during the missions is quick and easy. Thought has obviously been put into controlling the level of difficulty of the game by such artifacts as limiting the amount of Hercs the player can own and gradually introducing new types of Herc and technology as the game progresses. There is plenty of scope for variation in individual battles as well. A Herc's capabilities will be determined by the gravity of the world the battle is taking place on (affecting movement and range of weapons), the type of terrain the battle is fought on (providing cover and once more affecting movement) and the worlds electromagnetic field which can severely reduce the lifespan of bioderms and the effect of energy weapons. On some worlds, this effect can even make energy weapons useless requiring a quick visit to ye olde machine gunne emporium. Even replaying missions is not the drag it might be because the battlefields are generated randomly each time a mission is played."

The summary is simple: if you like giant robot games or hex-based sci-fi wargames in general, MissionForce: Cyberstorm is a must-have. I had a lot of fun with the game; the sheer number of Hercs and nearly unlimited ways you can customize bioderms ensure excellent playability and high replay value. It is also worth noting that the game is much superior to the very disappointing sequel, Cyberstorm 2: Corporate Wars. 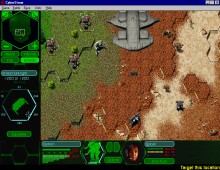