After a long nuclear war, life was no longer possible on Earth and humans (or what's left of them) moved to the Moon colony. Now, Your goal is to colonize other planets and defend against aliens. You'll need to build space crafts, research new technology, send colonists and conquer enemies. After making a huge empire, a new goal is put before You - return to Earth!

Paragon took some time off from converting paper & pencil RPG to do this above-average space strategy game that plays as good as it looks, despite below-average AI and mid-game tedium when you just wait for things to happen :) Still, technologies you can research are creative, as well as the many ship designs you can make. Recommended for Master of Orion veterans who wants a different, light break from their campaign ;) 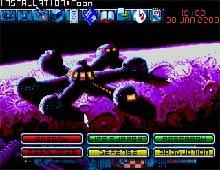 People who downloaded this game have also downloaded:
Deuteros: The Next Millennium, Master of Orion, Mega-lo-Mania, Imperium Galactica, Syndicate Wars