MEGA lo MANIA is a game where the player chooses to be one of 4 would-be-gods, each seeking to gain total supremacy over a planet. Each of the 4 would-be-gods controls a race of people (his team) Who slowly advance in weapon and defense technologies (from cave man through the middle ages, the Victorian era and on to present day nuclear weaponry and beyond) and fight each other for control of islands. The player wins by taking control of all 28 islands situated around the planet surface. The first 27 islands are divided into groups of three - each group being known as an Epoch. The player may choose to conquer the islands in any order, but he must conquer each Epoch is sequence before he can finally fight the `Mother of Battles' over the 28th island - known simply as MEGA lo MANIA. Only then will the player have achieved the ultimate goal of becoming the eternal god of this battle scarred planet!

You think a game like Civilization is a bit too detailed but like a game with the same sharp images as in Warcraft? Then Mega lo Mania might be a game for you since it offers simplified gameplay as seen in Civilization. What I'm most impressed with is the graphics though as they make the entire game interface very good and easy to use once you have learned using the left negation menu.

Other than you have to do research in new technologies you also have to expand your empire as well as conquer new areas by attacking the other empires. Like with Civilization you also have a timeline so you can always compare how far you are against what has actually happened. It's very easy to assign some of your men to research into new weapons as you simply assign the amount of men and you then see how long it will take to make it based on how many men you assign to the job. You can also get a status of your different buildings all the time.

While it does offer a decent strategy gameplay with great graphics I must admit I'm not a big fan of these less serious games and would always prefer a game like Civilization instead of Mega lo Mania but if you are one of those overwhelmed with too many things this is most likely a great game for you. Worth a try.

One of the early realtime-strategy-games. But WOW!!! what a game! Never ever played another strategy-game with that a great sense of humor, fantastic concept and fine graphics. Yeah well, today they make better graphics, but those graphics are just right and fit the game. I LOVE Mega lo Mania! We played that game for hours, days, weeks, months back then. It was almost something like a religion. The idea of the game is a simple - almost arcade-like - version of a classic research-building-attacking-based strategy-game, like maybe Civilization. But they simplified things to this ingenious mixture they created. According to the available resources you can expand your bases and invent better technologies. First starting with those incredible High-Tech weapons like wooden sticks and stones to be thrown at your enemies, soon going over to the more effective ones like swords and bows and in the end finally to flying UFO-like warmachines. Yeah, this game got it all. Nights of playing are guaranteed!

A wacky Populous clone that is fun for a short while before degenerating into mediocrity, Mega Lo Mania lets you lead a primitive tribe through the evolution of mankind, conquering neighboring islands in the process. The premise is evidently inspired by Populous: as one of four gods, your goal is to lead your people to conquer the entire map. You do this by ordering your followers to develop weapons, and send them out to try to destroy the enemy's fortifications.

A novel idea that Mega Lo Mania introduces to the mold is that the game is split up into "epochs," each of which is split into three islands. As you progress through the game, so does the time scale and corresponding human evolution. Hence, catapults and swords give way jet planes, nukes and eventually U.F.Os. The game is simple at first: you just need to design the weapons to use them. But as you progress, you need to mine the raw materials needed to manufacture the weapons, use factories to manufacture the weapons, or even use a lab which is needed to design complicated weapons. You can also form alliances with your opponents, but these are only temporary reliefs because you must destroy everyone to win a level.

With funny opponents who are parodies of real-life leaders, charming graphics and sound, and simple yet addictive gameplay, Mega Lo Mania is a good "light" strategy game that is perfect for those who are new to the genre. Strategy veterans, however, should scoff at the game's weak AI and look elsewhere for their fill.

Mega lo Mania is an entertaining strategy game that took up quite a lot of my time many moons ago on my trusty old Amiga. It was also released on other platforms such as the Megadrive and the PC, which is the version we have for you here.

The game starts with a short intro detailing the playing world and your ultimate goal and then moves onto choosing your player. You get to choose from 4 gods - Scarlet, Oberon, Caesar, or Madcap.

After the formalities it's on to the game. You start in the 1st Epoch, 9500BC and in total there are 9 Epochs each with 3 islands to conquer and with each Epoch you progress to, the time period will progress as well. After choosing one of the islands to play you choose a starting place, as do the computer players.

The first few islands are relatively easy to master with little to do, you can design a few weapons for your men and shields and armaments to boost the defence of your base and then attack the other players. In later islands you also have to mine resources to build weapons etc and you can move into other unoccupied places on the island to further increase your strength. If you are on an island with more than one opponent then you can form an alliance with one and combine to wipe out the other. However as soon as there are only two of you, you revert back to being enemies.

As time progresses so does the technology level. You will start of with sticks and stones but will progress to catapults, rifles, planes, nukes and even futuristic spacecraft!

In the end this isn't the hardest of strategy games but it will keep you occupied for a while and will be sure to entertain. To quote the game, it's, 'Ergonomically Terrific! 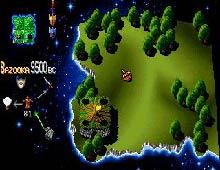