Powermonger - the successor to Populous that was so much more than that - yet never managed to step out of the shadow of it's popular predecessor. Like Populous Powermonger came with a campaign mode (195 lands to conquer), a random map and (still a sensation!) a network multiplayer mode. But the game was a lot more complex. It almost reached the dimensions of a world simulation with every little inhabitant being clickable, having a name, a hometown and a mood of his/her own. The atmosphere was intense - your army sitting around the campfire in winter would make babbling noises - seasons change, your citizens would age, become children and so on. Of course the game can be played pretty simple by just getting your small army to invade the next town, recruit more men, invade the next etc. - but esp. in the later scenarios it's worth to invest time into working on economy - construct trade goods and weapons, don't forget that your men need food either!

The graphics were a mild revolution in 1990 - rotatable and zoomable 3D! That plus the complexity of the game shows the enormous skill of the programmers at Bullfrog (namely Peter Molyneux - later also responsible for Black & White) - just look at the size of the game! However the downside of this game is that it takes a while to get into, the controls are not really intuitive - once you learned how to play Powermonger though it prooves why it sure belongs to the milestones of the strategy genre (even realtime strategy... although noone talked about it back then).

Technical sidenote: You can pretty much forget running Powermonger on a newer computer - even two slowdown proggies at the same time wouldn't help. The game is also not the biggest fan of Windows. If you can get hold of an older computer though (486 should do) by all means grab the PC version and play it there! The Amiga version more or less runs well - I was only able to get it to run with Fellow though - WinUAE was not SO happy with it.

One of the most underrated Bullfrog games ever, this is an accessible wargame similar to its more popular cousin Populous, but this time you're a military commander instead of a god, and therefore your "powers" are more limited. As with all Bullfrog games, there are many realistic elements: slaughter sheep to feed your soldiers, set their attack mode to passive or active, etc. An addictive game that's easy to learn but hard to master. 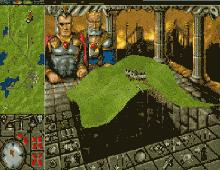