One of the best games ever made for the Amiga and Atari ST, Deuteros is the superior sequel to Millennium, Ian Bird's 4X masterpiece that was converted to PC by Paragon Software. Dixiak Narco's review explains why fans of Millennium and plot-based 4X games should take a look at this game:

"[The game is] ...extremely addictive. You start off on earth, 1000 years after Millennium ends. Apparently, after returning to earth certain scientific principles were lost. Now it's up to you to rediscover them and get yourself back into space. Just like Millennium, you have to research and produce your own equipment. Some inventions pave the way for other more advanced ones _ so you've got to research and produce everything on the list.

Anyway, you build your first Orbital Factory and install it in earth's orbit. You're mining minerals and shuttling them up to orbit so you can produce transport ships and other exciting devices. After colonising a couple of moons, you soon come into contact with the Methanoids.

Now this is the bastard. In Millennium 2.2 you diligently colonised every planet or moon that was able to support life (well I did at least) and I'm sure you were nice enough to provide them with a Solagen MkX power unit and all the other comforts of modern living, regardless of the fact that they had mutated into strange lifeforms upon landing on the surface. How do they repay you? They f***ing slaughter you in the sequel. At first they act all nice and offer to trade --- although they do throw you out of their docking port because "they need the space". Truth is they don't want you to see the big army they're throwing together to wipe you off the face of the solar system.

Back to the plot. You have to lose a couple of battles so that you can reconquer the orbital factory and discover some strange new devices (MTX: no man should be without one). After that you have to put your forces together and start attacking the Methanoids fiercely until you can drive them out of the Solar System for Good (about 4 minutes).

After the brief graphical sequence to commemorate the invention of a faster than light drive, you can send some troops to the next solar system down the line (Proxima) conquering that and then moving along etc etc till you've got the whole galaxy. I won't give the rest away - especially since I only got as far as Proxima myself.

Let's face it. Millennium was easy - you just couldn't lose. Deuteros wasn't. In your first couple of games, the Methanoids will kill you. After that, you get used to it and learn their tactics _ and if you must lose a planet, you remember to MTX out that precious Silver and Palladium before the Meths can get their grubby paws on it. And, by the way, whenever they take a planet they ALWAYS remember to replace your efficient set of eight mining rigs with a couple of run-down ones. 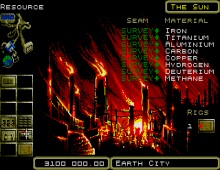 Deuteros: The Next Millennium screenshot