Metal Knight is a fun Command & Conquer-style real-time strategy game from Object Software, an independent Chinese outfit who later developed Fate of the Dragon and Prince of Qin. One of the first games from Mainland China to achieve significant popularity overseas (although limited only to Taiwan and Hong Kong - later release in the U.S. was a failure), Metal Knight introduces a neat feature that was unique at the time: you can build a wide variety of robots to do your bidding. This was quite unique in 1998 when the game was released, although the feature has been superceded by a great range of customization in Metal Fatigue and Warzone 2100, both of which were released years later. The gameplay otherwise is similar to numerous other C&C games: harvest enough resources to buy/build more units, then send your army to vanquish the enemy. Overall, this is worth a look as one of the more innovative RTS that remains very obscure due to limited worldwide distribution. Metal Knight at least deserves recognition as the first RTS game to introduce the robot customization feature years before better-known RTS games that were developed in the West. 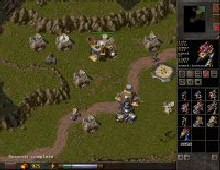