One of the best giant robot games I've ever played, Metal Fatigue is an excellent real-time strategy games in the same mold as Command & Conquer, but with enough innovations to stand above the crowd.

The story revolves around the interaction of three huge corporations in Earth's far future, called CorpoNations, whose field forces are led by one of three estranged brothers. These brothers, the Angeluses, are the focal point of the storyline for each Corponation. All three of the brothers originally worked for the Rimtech CorpoNation. However, after finding an alien artifact, the brothers argued and finally fought over how it should be handled. They then separated and joined one of the three CorpoNations. Diego, the oldest brother, still works for Rimtech. Stefan, the second brother was kidnapped and "re-educated" by the MilAgro CorpoNation after the brothers had battled. Jonus, the last brother, went to work for the Neuropa CorpoNation, and brought the alien artifact they had fought over with him. Rimtech is the "peacemaker" of the CorpoNations, a fact that the other nations try to use to their advantage. MilAgro uses a form of mind control to make their subjects do their will no matter what the cost or body count. They care little about the cost in human lives as long as the result is achieved. Neuropa is a form of "spiritual" CorpoNation, and all of the members worship this alien technology and always try to find some deeper meaning in the items that they find.

Within this elaborate setting, you can choose to play as any of the three brothers. Gameplay is where Metal Fatigue truly shines. Sure, there are "tandard" RTS features that everyone will recognize, e.g. harvest resources (lava in this case), build buildings, produce units, annihilate the enemy to go to the next mission. However, gameplay Metal Fatigue centers on giant robots, and they are not just another unit you can build. For starters, these robots are huge: they tower over vehicles and buildings. They are also carefully animated and built, in true polygonal 3D graphics similar to Total Annihilation. You have to manufacture different parts of a robot separately (e.g. torso, arm, leg), and each part can be researched for improvement. Before they are battle-ready, you must staff them with a human pilot unit. Unlike smaller units, the range of orders you can give to the robots is much more extensive. You can, for instance, order a robot to eject its arm (ewww) to replace it with an improved arm from a destroyed enemy robot. Or you can salvage that arm during the battle, and give it to research to be able to build it in the future. Part of the fun here is that once research is over, that arm will be a modified arm tailored to suit your CorpoNation; it won't look quite like the enemy's arm you salvage in the first place. Great fun. The game interface is a breeze to use, because the options change according to what unit or building you have selected, so it only shows you all the relevant information and options for your current selection.

Combat, as in most good RTS games, is fast and furious. You'll soon have to contend with dozens of enemy units at a time, not to mention many types of menacing giant robots, each with its own attacks and weapons. The game is a lot of fun to play, especially since your robots DO make a difference in the game. Also, similar to Cavewars, each map has 2 extra maps you can explore: above-surface (i.e. in the planet's atmosphere) and below-ground. This makes the battle very interesting, as your spaceships can do battle high above ground and lend support to ground units below. The plot also advances quite nicely through the missions, and each CorpoNation has its own agenda and significant differences in strengths and weaknesses. Playing the game as Rimtech will therefore be very different from MilAgro, and so the game's replayability is quite high. The only thing I feel is sorely lacking in the game is the ability to take over enemy robots with my infantry. Some maps also feel somewhat repetitive, and a more varied terrain would have been a welcome change. These nitpicks aside, though, Metal Fatigue is a must have for all RTS fans who want something a little different than another Command & Conquer. 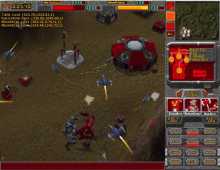