KKnD Xtreme is a great "expanded edition" of KKnD, one of the most underrated - and funny - real-time strategy games ever made. The official site explains why KKnD fans should get this version: " We've taken KKnD and rebuilt it for Windows '95, also adding new game modes and new missions. KKnD Xtreme takes the original game and enhances it with a huge list of improvements. KKnD Xtreme is a stand-alone product that includes all 30 KKnD missions, plus 20 new missions that will tax even the best KKnD players. In addition to the extra missions we've listened to our customers and included many of the features most asked for, including a skirmish mode and a host of interface and gameplay movements."

The basic concept of KKnD Xtreme is similar to countless RTS games: gather resources, build units, and go forth to annihilate your enemy. Although fans of Command & Conquer may dismiss it as another "clone" based on the first ten minutes of playing, KKnD Xtreme is much more than the sum of graphics that look suspiciously similar to C&C. Similar to Bitmap Brothers' Z, KKnD Xtreme is full of humor: voice acting, cutscenes, and animations will put a smile on your face.

Aside from the humor, KKnD Xtreme does boast a smarter AI than an average RTS. Enemy units retreat when the odds are not in their favor, and coordinate ambushes and multi-front attacks. The game also sports overlapping terrain features such as bridges, and adds turreted units which can move and fire at the same time. A nice addition is the "Technology Bunkers" that appear in various levels. These bunkers are from before the nuclear war, and they may contain anything from extra resource points to a big bad robot. And since these robots are from before the war, they are the toughest things around. The game also offers a very useful "unit queue" option that lets you queue up to nine units for each production facility - the first RTS to offer this function.

Overall, KKnD Xtreme can be described as the humorous cousin of C&C. While it is not all that different from Westwood's blockbuster, the fantastic humor and good unit balance makes the game much more deserving of attention than its sales figures would suggest. If you love RTS games with a campy sense of humor and don't mind graphical similarities to C&C, KKnD Xtreme is well worth your time. Highly recommended! 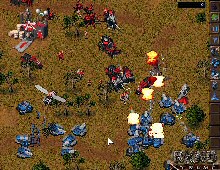