Krush, Kill, 'n' Destroy: Krossfire (a.k.a. KKnD2 is a fun post-apocalyptic real-time strategy game from Australian developer Beam International. Similar to its 'prequels' KKnD and KKnD: Extreme, KKnD2 is a marginal contribution to the crowded RTS genre, although it has some innovative features to go with pleasant graphics and a decent plot. One of the most ironic things about the game is that it boasts of "the best AI in the genre," when in fact the AI is not even intelligent enough to do pathfinding properly. Strategy Plus' short but concise review says it all about this ambitious RTS that doesn't quite merit our top game tag, although not for the lack of trying:

"Krossfire, set on post-apocalyptic Earth, starts its story forty years after its predecessor. In addition to the Survivors and Evolved in the original, a new side has been added: Series 9 agricultural robots. Nothing ticks off a farming robot more than the destruction of crops, and it's pay back time. Unfortunately, the addition of a new side has very little effect on the gameplay-there are no significant differences between it and the others. The game uses two dimensional maps and sprites for units. While this lacks the flair of a 3D game, it's well-executed, with terrain graphics and explosions that are on a par with other games in the genre. A fair amount of variation exists in the terrain; city, jungle, and desert maps are all well done. Also, the terrain is actually effective; for example, infantry units can move through trees, but vehicles get stuck. Controlling high ground is a huge advantage: units can shoot down over a cliff, but the poor saps below cannot return fire.

The units graphics are excellent, with lots of variations between the sides. Unfortunately, the differences end there. All three armies are effectively identical, functionally speaking-there is an exact counterpart for every unit. This severely limits the replay value; once you know one side, you know them all. Another problem is the lack of creativity. All sides have the equivalent of the big tank, the bigger tank and the truly devastating really really big tank. Bombers and transports are also included, but the strategy of the game boils down to whoever has the most powerful guns. This makes the strategy rather flat; everyone loves teleporting an army into the enemy base, but here it cannot be done.

The equivalent sides and lack of creative units does have one advantage: play balancing is not a problem, with one exception. The defensive structures are incredibly powerful. Most maps have choke points and players can set up a few towers capable of repelling huge armies until really powerful units become available. This makes designing an attack very challenging, but discourages attacks, slowing the place of the game.

The enemy artificial intelligence is decent; units play as a team rather than a bunch of NBA stars. The computer usually has a huge numerical superiority, but who wants even odds, anyway? The end result is a pretty hard game. After the first mission, it gets extremely difficult to blast through enemy defenses before being worn down by constant attacks. The only real problems in the AI department lie in unit pathing; troops seem to think the shortest distance between two points is pacing back and forth behind friendly units in the way.

Despite these shortcomings, Krossfire does have its good points. The user interface is excellent, among the best in real-time strategy gaming. Units are built using a menu on the side of the screen that is minimized when not in use. Players can quickly move down the menu to select what to build. This frees up the screen while giving the player complete control. Also, the requisite way point and rallying point functions are included and are quite intuitive. Krossfire is a marginal contribution to the genre. Decent artificial intelligence, nice graphics, and a good interface make it stand above many of its competitors, but there is not enough here to make the game shine. When all of the little features are boiled away, we yet have little more than another real-time strategy game pulled into the trap of trend chasing." 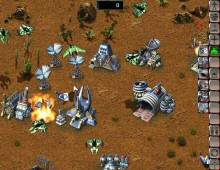