Despite its age, Mech Brigade remains to this day one of the most detailed simulation of modern land battles. As with his later masterpieces, Gary Grigsby took into account a staggering amount of data: combat ratings for practically every weapon type found in the arsenals of the U.S., West Germany, England, and Russia: tanks, helicoptor, missiles, not to mention a huge roster of artillery and infantry weapons. Using a modified version of the popular Kampfgruppe combat system, hit probabilities for every weapon are calculated instantly. Combat is resolved down to individual tanks, guns, and soldiers. Four scenarios are provided, each in a different area of West Germany. With random scenario options, the game's replay value is virtually unlimited. A must play for all grognards and Grigsby fans. 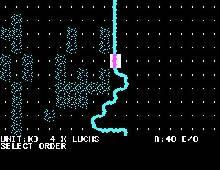