M. Evan. Brooks: "An operational/strategic simulation of the entire Eastern Front (1941-1945), this game was easily learned and played; sheer size and certain defects in the artificial intelligence presented the difficulty." Despite AI quirks, however, the game is undoubtedly Gary Grigsby's masterpiece, and in many ways the culmination of his dedication on perfecting the game engine for this World War 2 theatre that started with War in Russia for the Apple II in 1984 and the subsequent Second Front. 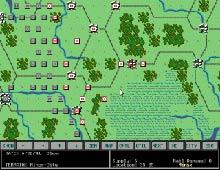