"THE simulation of the Pacific. Graphically acceptable, its strength lay in the sheer data and scope of the campaign. In all truth, I find it overwhelming, but I can recognize quality when I see it. Highly recommended for retirees -- or for those for whom the expression "Get a Life" means something. It properly emphasizes logistics, and will allow the player to choose his own level of command -- supreme commander, area commander, or even a task force commander while the computer runs everything else." 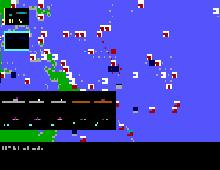