The Lost Admiral was the first game QQP released, in 1991, and remains one of its best. This strategic navy wargame features excellent resource system, numerous units to choose from, competent AI, and QQP's hallmark player history. There's even a neat plot behind the game: you're an admiral who was dismissed from the service but is given a second chance by an old friend. Your job, of course, is to prove your command prowess in sea battles to regain the admiralty.

M. Evan Brooks said it all in his succinct synopsis of the game: "[The Lost Admiral] is "Empire goes to sea"; quicker than others of this genre, it offered a plethora of scenarios and randomization factors. Easy to play, difficult to master -- it was a classic. Not historical, but so much fun to play that the lack of a historical base was never that much of a concern. I still play it today, and its easy access and quick play offers never-ending challenges." A must have in every wargamer's collection! Too bad Lost Admiral II, which was essentially finished, was never released after QQP went under. 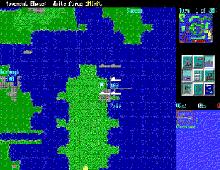