As Lost Admiral II was never released, The Grandest Fleet should be considered the sequel to The Lost Admiral. It is essentially The Lost Admiral dressed up in whiz-bang VGA graphics with many improvements in the AI. In true QQP fashion, the player's record is meticulously kept as he/she advances in rank, and the player's flagship in each scenario also become more powerful. Sadly the AI doesn't live up to the its predecessor's excellent AI, and at higher difficulty levels the AI's weakness is compensated by "cheating": it gets higher production capacity and resources. 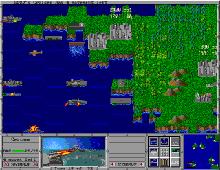