A classic wargame, Lords of Conquest is an abstract simulation that is easy to learn and play. The game is based on a little-known board wargame of the same name, and fortunately is a big improvement over that version.

Gameplay is similar Risk the boardgame, with more emphasis on resource management. Each player takes turn at the beginning of the game to choose territories, and once every territory has a ruler, the race to conquer the entire map begins. Waging war is limited to moving stockpiles and armies across the map, although careful planning is key to winning, since each territory has its own characteristics that can support vary amounts of army and stockpile. Planning when and where to move your resources are therefore crucial.

The game's excellent computer AI and interface, combined with other features that round off the package, such as a very versatile map editor, multiplayer options, a good variety of pre-made maps, and varying difficulty level, make Lords of Conquest is a must have for all fans of turn-based abstract wargames, and one of the games dying for a facelift. Too bad later conversions to 16-bit systems were mediocre at best. 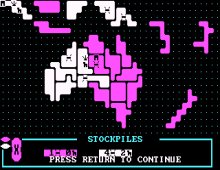 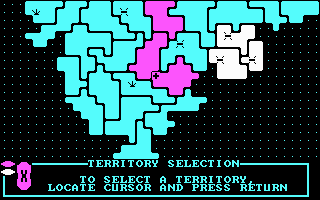