Liquid War is a very unique and addictive wargame designed for multiplayer. The game's real-time nature and complete lack of conventional units may make it look more like a psychedelic action game than a wargame, but it won't take long for anyone to see that strategy is more important to success in the game than mere reflexes.

The rules are easy to learn, but hard to master: you have to control an army of liquid (each "fighter" is a small square that looks like 1x1 pixel), and your goal is to try and eat your opponent (liquid of another color). There are no weapons of any kind: the only thing you have to do is to move a cursor in a 2D battlefield to direct the movement of your liquid army. When fighters of different armies meet, they eat each other based on basic rules similar to the Japanese board game of Go. Fighters all act independently, so it is possible for one particular fighter to behave differently than its peers. Because the primary goal of liquid fighters is to reach the point you want them to reach via the shortest route, it's important for you to plot an "optimal path" through the mostly maze-like map to minimize losses. The maps are all very creative, each requiring a different strategy to succeed.

Up to 6 people can play on a single machine, and the game supports Internet play. The game is fully configurable, and you can use your own maps to play. Overall, Liquid War is a fun, stimulating, and truly original abstract wargame that you'll enjoy playing for hours on end, especially against friends. 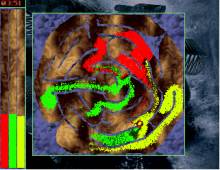