Incubation is one of the best X-COM-style games ever made - and in my opinion superior to MicroProse' much better-known X-COM: Apocalypse. The game features a slick interface, challenging single-player missions, flawless multiplayer modes, RPG-style character development, interesting sci-fi plot - all wrapped around a great 3D graphics engine. Scott Udell of CD Mag says it all about this wonderful old game:

"Incubation is Blue Byte's latest foray into their Battle Isle series of sci-fi strategy games. Instead of a top-down, futuristic "wargame" of the earlier titles, it purports to place gamers into tactical combat situations a la X-COM or Jagged Alliance. The game's story, however, has little tie-in with the series, and is self-contained: after accidental exposure to a human virus (Herpes Simplex... wonder how they got it?), the peaceful inhabitants of the planet Scayra have begun to mutate into violent, deadly (and pretty dumb) creatures who are now attacking the human colony on their planet. You command a squad of Marines who are charged with dealing with the incursion in a game that - knowingly or not - recreates the feel of the movie Aliens.

The game starts off with a tremendous visual bang. Blue Byte used the 3D graphics engine from their Extreme Assault game to create what has to be the most impressive visuals on any strategy game yet released... and that's before you run it on a 3Dfx-equipped machine. On a 133MHz Pentium without a 3D card the game ran noticeably slower than on the same machine with one. Of course, as this is a turn-based game, speed isn't critical, so the occasionally slow animation of characters shouldn't interfere with enjoyment (much). Sound is also a treat; from the moody music to the weapons and alien effects it's excellent, and helps to give you an "I am Ripley" feeling.

Many of Blue Byte's games have had interfaces best described as obtuse, but it appears they've learned their lesson; Incubation's interface is well laid out and easy to pick up. Click on a unit, choose a target, and fire; or, select a movement point and direction to face once reached, and off the character goes. Characters can be set in defensive mode, and react appropriately during the enemy turn. During combat, there are no separate inventory screens; the few items you can work with all appear on a character bar.

The game is best in its multiplayer modes. Sending a squad up against a human-controlled squad is extremely enjoyable. The tension level can grow quite high, largely because the turns are relatively short. The variety of modes is impressive as well; aside from the usual LAN and Internet, you can play-by-e-mail and even hot-seat (the latter are almost chess-like, as you move one character per side at a time). You can either choose to build your squads from pre-set characters ("mercenary mode") or design them from the ground up (the one flaw of multiplayer: only one player at a time can design and deploy their squad; others must wait). Choose one of the included maps, set conditions, and off you go; in this mode Incubation really feels like a tactical-level strategy game.

Then there's the single-player campaign, where, unfortunately, gamers will probably spend most of their time. Why unfortunately? Because it's here that the designers turn the excellent tactical squad-level multiplayer game into what is, at many times, a fancy puzzle game. Many missions - especially those with turn limits - require you to throw out the idea of tactics to move through the mission in a very particular manner. While the weapons mix you choose for your squad may let you take a different approach at times, you still feel like you're turning the Rubic's cube in a different order. The challenge in the single player games is not provided by the Scay'ger enemies - the AI in them appears almost non-existent (restarting a particularly tough puzzle mission for the nth time seems to show the same AI movement pattern repeated again and again) - but instead by the mission's design. Sometimes success in a mission comes down to tiny little details, and you have to redo a mission (for hours?) until you hit on the right combination. The frustration in facing these kinds of adventure-like puzzles is somewhat offset by the missions with reduced puzzle aspects, but these are too easy due to the lack of a real AI, resulting in a campaign that you alternately breeze through or beat your head against.

Incubation is rather like that dear friend who has one single personality trait that drives you absolutely crazy; it does almost everything very well, even brilliantly, but one aspect of gameplay - namely, the reliance on puzzle-missions over real strategy settings in single player mode - will be loathed by some. On the other hand, if you don't mind puzzles in your strategy games, or if you'll be primarily playing multiplayer, the game can't be recommended highly enough - your estimation will hinge on the kind of gamer you are." If you love turn-based strategy games such as X-COM, Incubation and its add-on is definitely a must-have. 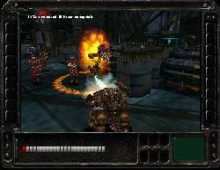