Shareware simulation of Napoleonic era, set during the period of the First Empire. Similar to SDJ's other wargames, La Grande Armee was designed to be played with friends only-- no computer opponent is available. The game's strategic options and scope are quite decent, but the lack of computer player seriously reduces the attractiveness. And even the present options are not up to the standards set by other Napoleonic games with computer (e.g. Datasoft's lackluster Borodino 1812 which is still much better than this game). Not worth a try at all, unless you are curious to know what kinds of options a human-player-only game could offer. 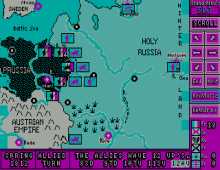 People who downloaded this game have also downloaded:
Battles of Napoleon, L'Empereur, Lost Admiral, The, War College, The (a.k.a. Universal Military Simulator 3), Civil War, The (Empire)