The Civil War is an ambitious US Civil War game from Greenius, published by Empire Interactive in 1996 and later in 1997 (with improvements and engine upgrade, marketed under the name of Master Player's Edition). While the game offers multi-level command perspectives over the entire Civil War, real-time gameplay, in-depth production rules, and dozens of unit types, it doesn't pull off most of these ambitious features successfully. The review at MobyGames explains it well:

"This poor game tries to do too many things, and doesn't do a good job at many of them. I must say that the programmer, Steven Morle-Green, really tried to improve it. He asked for suggestions and implemented many of them in a series of patches. It had an encyclopedia which was ok, but it didn't have very detailed information (the average entry was about 5 sentences long!). It also came with a little illustrated book that told how life was for soldiers during the Civil War. This was one of the most interesting parts of the whole package. Another nice thing was the game featured multiplayer support via LAN or modem. Since I didn't know anyone else with the game, I never tried it in multiplayer until several years after I got it (over LAN), and it crashed during the first battle...

The Bad: The "icons" -- from the main screen to the unit identification icons -- are so badly done it's almost impossible to tell what they're representing in some cases. The sprites that represent the units during battles are horrendous... the regiments move like stick figures. Also, the game would have to re-render the graphics everytime zooming in or out during battles. With the computers back in 95, this took several seconds and made for bad gameplay...

The game also had a lot of bugs. During battles, sometimes units would suddenly fly across the screen for no reason. In the strategic mode, if units moved by water sometimes they would get "stuck" in the water! Argh! It was hard to tell if some units weren't moving because of the difficulty setting (you could make it so that units wouldn't always act on orders immediately because of delays in the order reaching them) or if it was just a bug. I tend to think that in many cases they were bugs, because I don't think it should've taken a unit the whole course of the war before it would finally begin to act on the order. :) The game could have been really good. It was a quasi-real time strategy game... You would spend the "night hours" planning moves and ordering cities to raise and train regiments, build railroads, etc. In the day hours, the units would move and real-time battles would occur. However, with the poor graphics, bad music, and bugs, it just wasn't a very good game."

To the designer's defense, the latest version of the game (2.0.3, released in 1997) included numerous bug fixes and new graphics that make the game look more polished. Unfortunately, it's the case of too little, too late - by the time this version was released, wargamers would already have a chance to try Impressions' superb Civil War Generals series and leave this game behind. At least the extensive database provides a small measure of consolation. The best news is that Steven Green has made the game open source, so hopefully we will be able to play a 100% bug-free, upgraded version of this ambitious title sometime in the future. 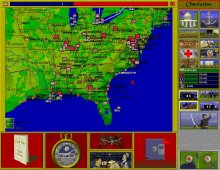