Ata: Extracts from the American Civil War is an excellent freeware remake of Infogrames' classic North & South humorous wargame. Like North & South, Ata is a two-player turn-based strategy game set in the U.S. Civil War, with significant action elements. As the commander of either the Union or Confederate army, your goal is to simply defeat the opposing side.

If you have never played North & South (and you really should), you will find Ata a fun, simple, and relaxing "light" wargame that places more emphasis on humor and playability than realism. Fans of Infogrames' classic will recognize the gameplay, and will rejoice at seeing the cartoony graphics upgraded to crisp SVGA resolution, with the sense of humor intact. The game proceeds in a typical turn-based fashion: you gain gold by conquering inpedendent or enemy states, and use the money to recruit more troops and pay their salary. Ata offers a great trading system which allows you to hire, fire, and exchange troops between your states.

As in North & South, most of the fun in Ata can be had on the battlefield, where you control 3 types of army units: footmen, cavalry and artillery. Watching cartoon soldiers fight each other never seems to get boring :) If you like beer-and-pretzel wargames, action games with a strategic overlay, or just humorous strategy/war games in general, check out this excellent remake! 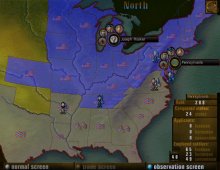