Undeniably SimTex' most underrated game, 1830 is a complex and faithful PC conversion of Avalon Hill's popular boardgame. As with SimTex' other games, strong computer AI keeps the gameplay fresh and interesting even in the beer-and-pretzel design (a normal game here lasts 8-10 hours).

In addition to conventional decisions found in other railroad-building games, e.g. laying tracks, 1830 features a unique and challenging stock market model that truly is the best I have seen in games of this type (and, being a Finance person with a passion for business sims, I've seen quite a lot). Before the "Operation Round" can begin, you must first decide on which stocks to buy and what companies to float in the "Stock Round," using a very clever stock bidding interface. The game isn't all about planning routes, either: as opposed to most railroad games in which the focus is on matching supply and demand (e.g. Sid Meier's classic Railroad Tycoon), the focus in 1830 is clearly on a more macro-level decision making. Instead of worrying about what types of goods to carry and how soon to replace obsolete trains, here your concerns are about cutthroat competition, hostile takeovers, and being ousted from the CEO chair. As can be expected from the designer of Master of Orion, the AI in this game is top-notch, and accurately reflects history: fearsome speculator James Fisk will concentrate on buying up stocks of other companies and taking them over, while famous engineer Westinghouse will concentrate on the operations of his company and laying the most efficient routes.

In the end, whether or not you'll like 1830 depends on your preferences. If you are a fan of miniature railroads who likes to watch the trains go buy your designed route, 1830 isn't a game for you. On the other hand, if you are a business sim buff like me who loves managing the company and keeping an eye on the Treasury Stock as much as doing the job, 1830 is simply a must-have. 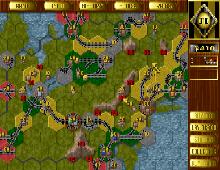