Revolution '76 and No Greater Glory are grand wargames covering the entire U.S. Civil War. You choose to be either Lincoln or Davis and you must deal with politics, cabinet choices, internal bickering, appointments and firings of generals and of course..the conduct of the actual war itself! Both games are designed by Ed Bever, longtime Sid Meier collaborator and himself a veteran wargamer. Highly recommended! 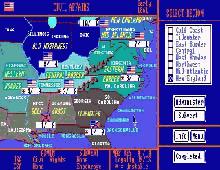