Back in "the good old days" SSI was renowned as a maker of high quality, in depth historical wargames.

Certainly the best of this time is Battles of Napoleon. The game allows to depict any battle of the Napoleonic era. A great editor allows you not only to create unique battle fields, but also the armies battling it out. When you design your troops you will see how much detail there is: each unit has three main attributes. First, it's either infantry, cavalry, or artillery. Then comes the level of the unit. Is it Old Guard, or only militia? Finally the specific unit type: Cuirassiers, Rifles, Musketeers, Hussars, Cossacks - it's all there. You can deploy the troops, assign victory objectives and conditions, supply areas and anything else that your battle field will need, including lines of defence and attack that the computer will try to seize.

The battle itself is divided into phases. Movement Phase, Fire Phase, Cavalry Charge Phase, Melee Phase, Retreat Phase. First you move your troops. Then, if they have still action points left after moving and/or changing formations, you can plot fire or even melees against other units. Every formation has its own leader. If they are too far away from their units your troops suffer. Also, if you re-plot their goal or move in a direction away from that goal you'll be punished as your troops get confused. ("We're supposed to be at that hill over there, why are we going to the woods, then??") this level of neat detail is felt throughout the whole game.

The turn based gameplay and the very basic (almost ASCII-style) graphics might scare some gamers away. But every wargamer who gives the game a try and gets involved into it will love it for its detail and tactical possibility. The version I own not only had the original scenarios that came with the game (Borodino, Quatre Bras, Auerstädt, Waterloo) but also a great number of other Napoleonic battles. In sheer detail Talonsoft's Battleground series comes to mind, but those (while nicer to look at) are by far not as customizable and offering as good gameplay.

Released in 1991, this is a very realistic war game on the most famous battles of Napoleon's career -- the game comes with Borodino, Waterloo, Quatre Bras, and Auerstadt, but you can design your own ones. You have the ability to play as either the French or the Allies, and all aspects of the battles are here -- cavalry charges, artillery barrages, infantry squares, and so on. The EGA Graphics are pretty good, despite the age of the game. Downsides to the game are the STEEP learning curve -- the manual is over 100 pages in length -- no mouse support, and horrible sounding PC Speaker sounds. If you are looking for a good war game on Napoleon's battles, and have the patience to learn this, this is the best game out there. 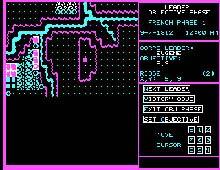