An ambitious game that chronicles the life of Napoleon Bonaparte from his days as army commander to the ruler of empire, L'Empereur is a solid strategy game that simplifies many of RTK's statistics and tactical-level commands in favor of more strategic-level diplomatic commands to fit the era. In an interesting twist to the by-now-familiar RTK engine, a set of new commands will replace the old once Napoleon crowned himself Emperor of France. 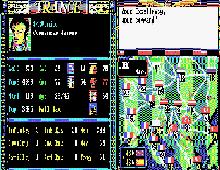