L.E.D. Wars is an above-average real-time strategy game that in the end plays like a low-cost alternative to Westwood's famous Command & Conquer series. The plot: in the 21st century cyberpunk world, people can't survive without liquid evolution drugs, or L.E.D. Your job is to secure your megacorporation's production of L.E.D. pills, eliminating your enemy, and confiscating his L.E.D. too. You go through a series of 14 missions, each requiring the completion of several objectives, which always includes the elimination of all enemy forces.

The gameplay is similar to Dune 2, although it is slightly more complicated. Three important resources are crucial to your success: L.E.D., power, and oil. L.E.D. is obtained by cultivating and planting seeds, then harvesting the crops when they are ready and returning them to the refinery. Power is produced through Quantum Plants and provides energy for buildings. Oil is obtained by building drills and then is used to construct buildings and all vehicles. To plant more crops, which can be used to produce more L.E.D. pills, you have to produce seeds which can be spread by a seeder on fertile land, and then harvested when the time is right.

You can build around twenty buildings in the game, ranging from barracks to seed factories and refineries. In contrast to Dune 2, you can set up buildings just about anywhere on the map, making it much easier to expand and make use of L.E.D. fields far away from your 'main base.'

Although each of the 14 missions requires you to finish different objectives, they are not very different from each other. You always start with a given number of buildings or units or both, and your task is to survive and eliminate all opposition. The game does have a storyline that moves you from one mission to the next, but the story itself is not very interesting. All in all, L.E.D. Wars is simply just another real-time strategy game that introduces no new elements to the genre. Recommended only for anyone looking for a "poor's man version" of C&C, or a quick RTS that supports multiplayer in DirectPlay mode. 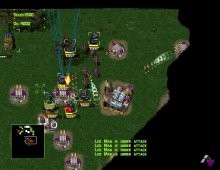