Knights of The Desert

"An operational simulation of Rommel's Desert Campaigns in North Africa during World War II, [Knight of the Desert] was one of the first games to offer multiple stacking in the same hex. Slow and ponderous, its re-creation of the African Campaign did not deliver its potential. Long a mainstay of board wargaming, [unit stacking was also] first implemented here, albeit in a clumsy fashion." 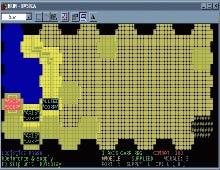 Knights of The Desert screenshot