Gary Grigsby's updated version of Carrier Force, it did not have the graphic capabilities of [SSG's] Carriers at War II, but it did have a campaign option. While I considered this to be a worthwhile option, I do have to admit that my then-fifteen year old son would not even bother booting this up, although he was fascinated with Carriers at War. In summary, I would recommend this to the grognard, while Carriers at War has more appeal to the MTV generation. 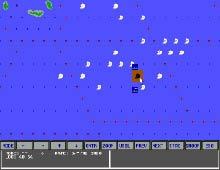