At first glance, Kingdoms at War looks like just another fantasy/medieval strategy game in the same vein as Warlords or Dominus. But spend some time with it, and you will discover a lot of nice little details that are reminiscent of Interplay's classic Castle and Cinemaware's Defender of the Crown.

The plot is simple: unite the various city states under your banner by battling the other five Kings. The game offers six scenarios plus a custom scenario, and modem play is supported although only two players can compete (turn-based hotseat mode supports up to 8 human players, though). The gameplay will be familiar fare to strategy veterans: set taxes, hire troops, attack opposing armies, spy on enemies, improve a city's defence, and so on. One innovative and fun feature is the great variety of medieval-style tournaments you can hold - primarily to recruit the best warriors in your land, but also to increase happiness of the people. Each type of tournament brings in different types of warriors; for example, if you hold an Arena Tournament, many different pit fighters will turn up at your door, as well as Orcs, Ogres, Barbarians, or even Giants.

The AI in the game is a bit too predictable, but it is not bad. Overall, Kingdoms at War is an enjoyable fantasy strategy game that manages to be different enough from the me-too crowd to be both refreshing and interesting. It's a fun, unassuming little game that may just surprise you with solid playability and smooth gameplay. A top game in my book. 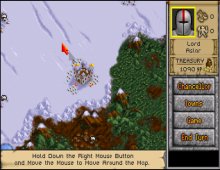