Perhaps the first truly accessible strategy game about the Middle Ages, Castles is a classic from Interplay that offers many hours of addictive gameplay. As a prominent English noble living in the 12th century, your mission is straightforward: build a castle and defend it from the Celts.

What makes Castles a lot of fun is the variety of castles parts (walls, gates, towers, etc.) that effectively allows a limitless number of designs you can implement. There are some inconsistencies in the times it takes to build different parts, but they do not detract from the fun. True to the intense political turmoil of that era, you will also have to make decisions (by answering multiple-choice questions) that will affect your favor with the Church, nobles, and peasants. Throughout the game, your constant task is to maintain a strong military and a large workforce while watching the level of your treasury.

Although Castles is easy to learn and lacks complicated options, it is by no means an easy game. The game is quite long, and if you don?t build up your army early in the game, you will find yourself at a severe disadvantage in later stages when each new invasion by the Celts brings more and more soldiers. Worse, battles are not as much fun to watch as when you are building a castle. Every battle take place on your castle grounds, where you can watch your tiny animated archers rain arrows from the towers and walls and foot soldiers engage in close combat. Watching is pretty much all you can do, though?some tactical options a la battles in Kingmaker would have been a welcome addition.

Still, with all its inconsistencies and some weaknesses, Castles is an immensely enjoyable game that should please anyone who wants a fun, not overly complex game set in the Middle Ages. Castles requires more strategic muscle than Defender of the Crown, yet is not as sophisticated as Machiavelli The Prince. 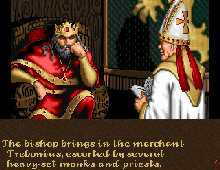 People who downloaded this game have also downloaded:
Castles 2: Siege and Conquest, Lords of The Realm 2, Civil War Generals 2, Master of Orion