King's Table is an excellent computerized version an ancient Scandinavian board game of the same name. The arrangement of the pieces and differing objectives of the two sides set King's Table apart from Chess or Draughts. White player's objective is to move its king to the haven of one of the corners of the board, while black's goal is to prevent that from happening. This computer version also features "Ragnarok" tournament mode, where the player takes the role of Norse God Odin, who has special pieces with unique powers. While the AI is none too bright, the unique gameplay and solid execution makes this a great old game. If you love esoteric board games, it doesn't get much more esoteric than this. 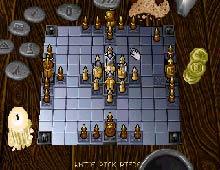 People who downloaded this game have also downloaded:
Lords of the Realm 2: Siege Pack, Great Battles: Collector's Edition, The, Lords of The Realm, Magic: The Gathering, Metal Fatigue