Know Heroes of Might & Magic? Where they got the game engine from? Well here is your answer. King's Bounty is the first version with the famous game engine.

You are a bounty hunter with your own private army and you will have to defeat different enemies so you can collect your bounty. For that you can even more and better armies including different things so your soldiers fight better as well. The control are of course easy to find out all though it's almost only key based.

Nice little strategic RPG (haven't been sure where to put it). Somewhere in a distant Fantasy-Land the ruler is in big trouble. The evil Arech Dragonbreath has stolen King Maximus the Sceptre of Order. Now it's your turn to get it back. You'll have the choice to play either as knight, paladin, barbarian or sorceress. Each with it's own ups and downs - the barbarian for example is good in ordering his troups (important, coz' you don't fight RPG-like, but strategic, meaning your men against the enemy's troups), while the sorceress is good in performing magic. Both is useful and knights and paladins are good in both, but no experts in one of it. You choose your troups out of 25 different races of monsters. Your goal is to find the sceptre, to do this you got to find several map-pieces. You got to solve some quests, find some items and so on - little bit of the old Ultima-Style, but surely with better graphics and a strategical touch. A quiet little game that's better than it looks like.

Back when I became instantly addicted to this fantasy strategy game, I wondered why it didn't sell better than it did, and why so few magazines recognized its quality. Years later, when the game was given a tremendous facelift and reborn as Heroes of Might and Magic (HOMM), the great game concept finally got the attention it deserves. Still, few people know about HOMM's predecessor even when New World Computing included it with the first HOMM game. So here it is.... the true beginning of a classic fantasy conquer-thy-neighbor series :) 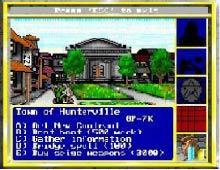 People who downloaded this game have also downloaded:
Lords of Magic: Special Edition, Master of Magic, Romance of the three Kingdoms 3, Lords of The Realm 2, Jagged Alliance