Not too many games of this kind were made: Laser Squad, X-Com, Jagged Alliance. Squad leading strategy games are one of the best type of strategies, but for some strange reasons game companies aren't making more of them. In Jagged Alliance you're in role of a mercenary leader. Your job: recruit mercenaries, equip them and complete the mission. Various weapons, characters, areas of action... Every mercenary has its own characteristics (for example - Fidel will never retreat, he'll rather die fighting). The game is taking place on an "industrial" island on which two factions are fighting over the land on which a mutated trees are being grown. After a nuclear disaster that happened on the island, some vegetation mutated and is now a source of various medication. The price of those trees i very high, and you must help the "good" guys take over the complete island...

I'm myself a big fan of Microprose's X-Com series and have been that since the first game in the series was published. So it was a great surprise the first time I played Jagged Alliance since those games have many similarities. Mostly combat related features though. Like seen in only few other action based games the combat is turn based which means that each of your soldiers will only be able to do a specified amount of actions within a turn. Said in another way, each of your characters will get an amount of points they can use in each turn.

You start the game by selecting between different freelance soldiers each with different skills spread among different areas (shooting, explosives, medical etc.). Each of them also demands a fee for each mission you pick them for so if you are on an easy mission it's not wise to pick the most expensive characters since you wont' be able to finance future missions that require certain people that know how to get the job done. Each mission is chosen by you from a map. You don't have to follow a certain path and can always freely choose which mission to play. Before you choose it you can get a briefing on it. Many different weapons are of course included as well and each mission is different so you won't just have to kill the same enemy in a new area on each mission either.

In Jagged Alliance you are served several missions with a high quality of gameplay and overall the game is quite detailed with decent and some nice comments when your soldiers kill enemies. The game is easy to control and when you walk around on the different missions you can go into houses, run, crawl and much more. Sometimes it seems like you simply can't hit your enemies while shooting and at other times you hit them every time. The makes the game a bit unbalanced but it's still great fun. If you are a fan of both strategy games and action games you will love Jagged Alliance as it offers many of the good parts from both genres.

One of the most addictive games ever made in any genre, Jagged Alliance is a great strategy game that successfully combines the outstanding squad-level gameplay of X-COM with an unprecedented level of personalities and RPG elements that make it even more addictive than MicroProse' classic.

You know the game is something special when it starts off with a great plot: the island of Metavira contains valuable tree sap, which is harvested and sold to pharmaceutical companies. The island facilities were operated by Jack, his daughter Brenda, and Lucas. Lucas took over the island by hiring a bunch of thugs to capture the sap trees. You are then hired by Jack and Brenda to recapture the island. The catch here is that you don't have unlimited funds at your disposal: you are paid based on the amount of sap that is harvested by your workers. Funds are used to hire mercenaries on a daily basis to recapture the island from Lucas.

Gameplay evolves over a complete day during which you try to perform your mission, which starts in any sector you choose. You move each of the team members in real time on a tactical map, until combat starts, at which point the game switches to a highly effective turn-based mode which allows you to plan moves for each merc. X-COM fans will be right at home with tactical battles in Jagged Alliance: in each turn, every merc has a limited number of "action points" that are used for everything from moving to firing a weapon. Leaving a few action points remaining at the end of your turn will allow a merc to respond when he/she spots an enemy during the enemy's turn.

Instead of faceless soldiers of X-COM, however, Jagged Alliance mercenaries come to life with characteristic snides, complaints, cheers, and even bickering among themselves. Each merc has his/her own personality which does affect gameplay: coward mercs will tend to whine and run away from combat quicker than others, while bloodthirsty mercs will unload all their ammo on a hapless enemy, and will refuse your command to change target or lower their arms. Relationships between mercs are also important: many mercs will refuse to work with their rival mercs, while some may agree to work for you only if their buddies are in the team. The merc's personalities are so well-written and distinctive that you will soon grow fond of some mercs and wary of others.

There are numerous other innovations that Jagged Alliance brought to the genre that will take pages to list. In addition to tactical battles, there are many strategic options: you can hire guards to defend conquered sectors against enemy re-invasion in case your mercs are somewhere else. The enemy AI is also excellent. They run for cover, try to out flank you, respond to to gun shots, and appear to have different skill levels. There are also a lot of special items, some of which are hidden, that can be used to help you with your missions, as well as optional missions. In true RPG fashion, your mercs' statistics improve with more experience and practice, and the plot is integrated seamlessly into the actual gameplay. The missions themselves are the typical Find Something, Rescue Someone, Capture something, etc that RPGers have come to love.

Landmines, traps, team interaction, and the general RPG feel are but some examples of a long list of strengths that give Jagged Alliance a lot of depth and addictiveness rarely seen in this type of game. If you ever wondered how X-COM can be made better, look no further.

Note: The version here is only CD-rip, which lacks great voice acting that truly gives the mercs their own personalities. 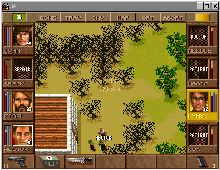