Khalaan is a fun and unique strategy game set in a fictional Arab country. The game's exotic setting is blended into gameplay to great effect: you will have the opportunity to engage in swordfights, Saracen-style, and use the magic lamp that comes straight out of Arabian Nights.

The game itself plays like a standard conquer-the-world strategy game, except that your goal is the caliphate instead of kingship, and your armies must march across scorching deserts instead of the Medieval plains. As in most other historical games, raising an army is an expensive proposition, and you must strike a fine balance between tax level and people's loyalty. You can play as another character for an easier or tougher challenge. The game becomes a tiring war of attrition near the end, as trade and diplomacy models are very simple and don't allow for subtle maneuvers such as espionage or alliance. Still, the game is worth a look due to its unique historical setting. But beward-- Lawrence of Arabia this is not. 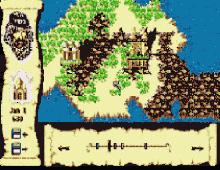