Jurassic War is an interesting and above-average Warcraft clone from Poland that should have been more successful with more promotion and widespread distribution. The game is best described as Warcraft transport to the prehistoric times: instead of knights and archers, you control cavemen. Although it doesn't look very different at first, the innovations of Jurassic War - or at least the designers' attempt to break the mold - soon become apparent once you start looking for basic resources such as food. To begin with, your cavemen have more RPG-style statistics than typical units in Warcraft clones: they have hit points, vitality points, and other parameters that RPG gamers will be familiar with. Unlike most RTS where your goal is to conquer the other gangs/tribes/factions/alien races, in Jurassic War your goal is simply to survive in the harsh climate of prehistoric times. You must find food for cavemen, fight creatures ranging from tigers to big dinosaurs, and find the best locations to build shelter. It may not be as complex as Silmarils' (overly complex) Deus, but the survival-of-the-fittest theme of this game is one that is implemented well, and should definitely be followed up on by game companies.

I find Jurassic War a fresh entrant in the crowded field of real-time strategy. The graphics is below-average and the terrain is dull to look at, but if you can look beyond the drab palette, you will find an interesting and rather good game lurking underneath. This game comes recommended. Well worth a look for all strategy fans. 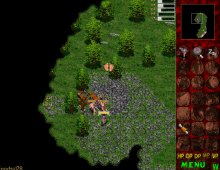