The Isle of Four Winds - Rune War is a unique Mahjong game that wraps the traditional Oriental board/gambling game with a Western-style fantasy mythos, with a plot and "Rune War," an average conquer-the-map game. Julia Scott of Strategy Plus sums it up well in her review:

"The Isle of the Four Winds: Rune War is a unique "fantasy" strategy game that contains two separate concepts: Asian Mahjong and Rune War. Mahjong we all know from watching grandma play around the kitchen table, but Arcanium Productions has added a new twist to this ancient game by including Rune War, a game of territorial conquest. Sounds weird, right? How could you possibly combine Mahjong and a super fantasy strategy game and come out with a winner? Here's how it works: Rune War is a tactical "take control" map game, and Mahjong the tile part. Play alternates between rounds of Mahjong and Rune War with each mode lasting about five minutes. As you progress with your Mahjong hands, you'll receive magic spells and monsters that operate under your command, and other benefits based on the tiles you play. These awards are used during the tactical mode. So the basic idea is, you play Mahjong to get advantages you can use to conquer the map.

You might now be thinking, "I don't know how to play Mahjong." Have no fear, although knowing the traditional hands and plays of Mahjong will certainly help you, it's not vital to get somewhere in the game. Naturally, though, the better you are in Mahjong, the more advantage you'll have in the tactical mode. As in traditional Mahjong, you'll play against up to three other opponents, and the AI is very strong. Even so, the best times with games like this are only had when your opponents walk, talk, and occasionally breathe, so it's fortunate that Rune War includes support for both LAN and Internet multiplayer play. Total game time is around four hours, short enough to play in one evening."

If you enjoy Mahjong in general, you'll find this little-known old game a decent challenge, although the computer players could be better. Overall, though, Isle of Four Winds is nothing more than an "okay" game that includes an average Mahjong game and a below-average strategic game. If you want a fun fantasy wargame, Master of Magic or Fantasy Empires remain superior to this unique, but not exceptional, old game. 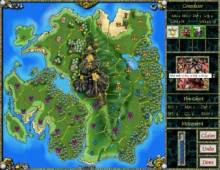