Iron Cross is an ambitious but disappointing real-time wargame that lets you control infantry, artillery and armor units on various battlefields and you can play either the Axis or the Allies. There are twelve scenarios of progressive difficulty from The Longest Day in Normandy, during the biggest amphibious invasion of history, to Bridgehead at Remagen in Germany where you must avoid the destruction of the last bridge over the Rhine. In the words of M. Evan Brooks, veteran wargame reviewer: "A "real-time" tactical game of World War II, [Iron Cross] proved that "real-time" was merely another name for making the player do so much in so little time that the AI looks truly inspired when it was really retarded. History tooks a back seat to fun; historical battles were determined by orders of battle dependent on your personal point purchases. If you enjoy being overwhelmed by game systems that clearly do not want you to have a valid chance at tactical success, then this was the game for you."

The game does have some saving graces, although they are all "cosmetic" : authentic World War II footages that are sprinkled throughout the game are well-done, as are digitized sound effects. SVGA graphics also enable a large view of the battleground, although the units are not as clearly represented as SSI's classic Panzer General, so you will likely have a hard time telling them apart. Various units have characteristics such as the reloading speed, amount of ammunition, speed, size, etc., although they don't seem to affect the outcome very much because the enemy AI is none too bright. Overall, Iron Cross is a Real Dog that neither casual nor die-hard wargamers will enjoy. Steer clear of this one and play Clash of Steel instead. 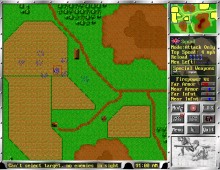