Inucla No Classical is a fun turn-based board game from Japan based on original concepts. The game is designed by one of the lead programmers of Siter Skain, one of Japan's best shareware developers. Starting with 3-6 pieces (in the form of cute anime dogs) at opposite ends of a hexagonal board, your objective is to be be the "last man standing" on the board. Similar to games like draught, you "capture" your opponent's piece by jumping on it, but there is a catch: the exact number of tiles a piece can cross each turn is the number printed on the tile it is standing on. So if the piece you want to move stands on the number "3," it can only move to a tile which is exactly 3 tiles away, in any direction. If you land on the same tile as your opponent's piece, that piece is "captured" and removed from the board.

To make the game even more difficult, every time you make a move, the previous tile the piece used to stand on would "fall away" from the board, leaving a hole in its place. This means you cannot return to that spot again (you could, if you want to sacrifice your own piece), therefore reducing the number of possible moves every turn. To make things even more difficult, the outermost tiles of the board will fall down after every 10 turns, dragging all the pieces that stand on them straight to board game hell. A numerical counter at the corner of the screen keeps track of the number of turns until the impending doomsday, so you had better move your pieces away from the outer ring before every tenth turn.

With unique concepts and a challenging AI, Inucla No Classical is both fun and addictive. You could play against another human player in hotseat mode, change the maximum number printed on tiles (for instance, reducing possible numbers from 6 to 4 make the game easier), and change the difficulty level. The game is in Japanese, but no board gamer should have any trouble figuring out the interface and rules within the first few minutes. Pleasant background music and smooth animations add to the enjoyment of the game, as well. If you enjoy challenging and unique abstract strategy games, especially a relatively short one that can be finished during a 5-10 minute coffee break, this freeware game from Japan comes highly recommended. 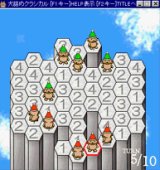 People who downloaded this game have also downloaded:
Hexy, Stronghold, Master of Magic, MissionForce: Cyberstorm, Emperor of The Fading Suns