Hexy is an excellent Windows version of Hex, a fun but little-known abstract board game I used to play a lot with friends in college. As explained on MazeWorks' Hex page, the game "...was created in 1942 by the Danish inventor Piet Hein, and independently by the American mathematician John Nash in 1948. ...In 1952 it was marketed in the U.S. by Parker Brothers, who gave it the name Hex. The commercial game is no longer available, but Hex has retained its popularity over the years among game players, mathematicians, and computer scientists."

In Hex, two players take turns putting playing pieces on hexagon-shaped tiles on a hexagonal board (which looks similar to Chinese Checkers). The winner is the first player to create a "bridge" - an uninterrupted chain of pieces that connect two opposite edges of his/her color. The game is a lot of fun, especially against a competent opponent or computer AI, because it's impossible for a draw to occur. Either player eventually wins at the end, when all empty tiles are filled. Effective defense is often the best strategy to win the game, because if you can successfully prevent the opponent from creating the bridge, chances are you will yourself form the bridge.

Hexy's AI certainly meets the challenge, as it features arguably the strongest Hex player today. You can change board sizes depending on how much playing time you want. If you enjoy abstract strategy games, Hexy is an outstanding freeware gem that is great for those 10-15 minute coffee breaks. Highly recommended! 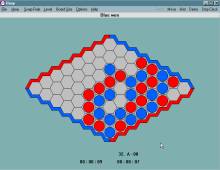