Laser Chess is an excellent Java fanmade version of a fun chess variant of the same name that first appeared on the Atari ST in the April 1987 issue of Compute! magazine as winner of a programming contest. Originally written by Mike Duppong, the game was later translated to a number of platforms by enthusiastic fans, including Commodore 64, Amiga (where it was most popular), PC DOS, and many other platforms.

From the game's rules: "Laser Chess is like chess in that the game is played on a grid (though 9x9 instead of 8x8), each side controls two rows of pieces, and that the object is to capture the opponent's king. But there's an exciting new piece: the LASER! Each side has one laser, which can fire a beam which has one of four interactions with pieces it hits, depending on the type and orientation of the piece. It can be deflected to another direction, it can destroy the piece, it can pass straight through with no effect, or it can be absorbed completely. You can tell by looking at the shading on the edge exposed to the beam what effect will occur:

BRIGHT edges deflect laser beams. If a beam hits the edge it will bounce off at the appropriate angle as dictated by physical laws.

DIM edges are vulnerable to laser beams. If a beam hits the edge the piece will be destroyed (and the beam will go no further).

DOTTED edges are indifferent to laser beams. If a beam hits the edge it will go straight through as if the piece were not there.

Beams are absorbed if they hit the edge of the board.

This Java version not only runs on a wide set of platforms (anything that can run Java, naturally - but be sure to download and install Sun's Java 2 Runtime Environment first if you don't have it), but also is very faithful to the original, offers a tough AI, and even adds nice new features including limits and multiplayer support (via TCP/IP). If you like chess or unique board games in general, Laser Chess will keep you glued to the screen with challenging gameplay and very interesting rules. The rules take some getting used to, but the game is well worth the learning curve. Highly recommended! 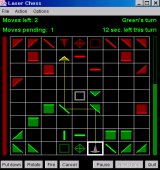 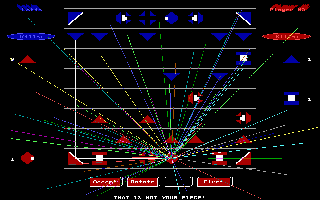