Abalone is an excellent unofficial Windows version of an original abstract board game of the same name, which remains largely unknown outside France where it was invented. In this unique board game for two players, your goal is to push 6 opponent marbles out of of the board. During your turn, you can move either 1, 2 or 3 in-straight-line marbles one position in any direction. You can "push back" opponent's marbles whenever the number of your marbles that lines up in the direction you are moving (maximum of 3) exceeds his/hers. To be more specific: if you move 3 marbles, you are allowed to push backwards 2 in-line opponent marbles or 1 marble, while 2 of your marbles can push 1 of your opponent's. It may sound confusing at first, but the game is a lot of fun to play and requires a unique strategy that isn't like any other board game. The hexagonal-shaped board allows a wide variety of "secure" positions, when your marbles are arranged in a honeycomb formation that are at least 3x3 from any direction, and therefore immune to your opponent's move. The challenge of Abalone lies in careful maneuvering so that you could move your 2 or 3 in-line marbles to push your opponent's marbles off the board, without leaving your positions vulnerable to a counterattack. For instance, a good strategy is to always have a marble that can move back to shore up defenses against a 3 in-line attack.

This computer version of Abalone offers the same compelling gameplay as the board game, with a very tough AI - I was never able to beat a Level 3 computer player, and that is only halfway through the game's 6 levels of difficulty. You can play against another human player in turn-based hot-seat mode if you wish, or change the starting position of the marbles including the challenging positions used in the MSO (Mind Sport Olympiad) tournament. The only gripe I have about this program is that it comes with no help at all on the interface, which is not very intuitive. To prevent fellow board game lovers from being aggravated as I was, here are the controls I discovered: when you want to move marbles vertically (i.e. 'up' or 'down' the board), click on the first marble to pick it up, then click on an adjacent marble above or below the first marble to move the marbles in that column up or down (if the column has more than 3 marbles lined up, you cannot move it). To move lined-up marbles in a different direction than its formation (e.g. moving 3 horizontally-aligned marbles vertically up the board, or 3 vertically-aligned marbles horizontally across the board), you must click on the first marble in that formation, then on an empty space next to it. You will then be given a choice of whether to move the adjacent marble as well (up to 3).

Interface ambiguities aside, Abalone is a fun, challenging, and very fascinating game once you get used to the controls. The game has been a permanent resident on my hard drive since I got it in 2001, and it is not leaving anytime soon. Since the average game length is too long for a quick coffee-break mental exercise, Abalone is perfect as a substitute for complex board games like chess or go. Highly recommended to abstract game lovers everywhere. 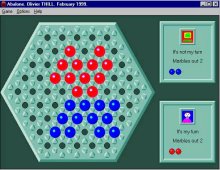