St. Petersburg is a great PC conversion of the card/board game of the same name from Hans im Gluck/Rio Grande Games, the same publishers that brought us Carcassonne series. St. Petersburg is a "beer & pretzel" card game that "...deals with 'gracious living along the river Neva': the baroque palaces, wide boulevards and imposing bridges of St. Petersburg. On May 16th, 1703, Czar Peter laid the cornerstone for the first building. Quickly, glorious buildings were added, always being expanded, so that Nobility (as well as victory-bringing Fame Points) may want to move in. But to accomplish this, one needs merchants that can bankroll the necessary Rubles or the glory is over. The competition isn't sleeping either, and can sometimes steal a desired card right out from under your nose." Your goal, naturally, is to finance the city of St. Petersburg and become the richest man standing at the end of the game.

St. Petersburg involves a lot of number crunching, which makes this PC version a welcome change for fans of the board game. The most important key to winning in this game is mastering the concept of min/maxing, wherein you must deploy a very limited amount of resources for maximum results. This is very important, especially since you are penalized (i.e. having points deducted from total score) for non-Aristocrat cards that remain in your hand at the end of the game. Since you only have to make up to only 7 or 8 choices each round, St. Petersburg has none of the "way too many choices syndrome" that plagues many a board game. The random element of card draw creates enough variety to ensure that no two games are alike. The computer opponent in this PC version is very good even on the easy levels, the user interface is intuitive, and the the graphics are authentic - the author used scans of the actual cards. The only downside is that there are no built-in rules in English - the English patch only translates the menus - but at least you can find English translation of rules on the Internet (also from this site). Highly recommended for fans of quickie strategy games like Carcassonne that take only 30-40 minutes per game but involves a lot of strategy and number crunching. 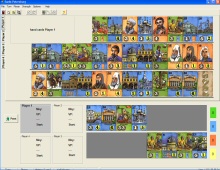