Wizards is a great PC conversion of the Avalon Hill fantasy board game of the same name. In this fantasy game, hexagonal map tiles are placed on a blank mapboard to make up the arrangement of the Enchanted Islands. Most of the game consists of performing various mini-quests by moving around the 18 islands. Each quest adds to the 10 quest per fortnight (20 day) requirement. Failure to reach this total of quests among all players causes one of the 18 islands to be flipped over and taken out of the game. In this way the players are competing mainly versus the game system. Endgame consists of players racing against each other to be first to collect 6 Gem Fragments and take them to the High Druid.

Like the original board game, your job is to explore the islands to fulfill various quests before Evil can corrupt the whole world. Unlike Avalon Hill's more complex and better known Magic Realm, Wizards is very easy to setup, teach, and play. As the PC game designer explains, the game's excellent "...variety of quests and random events make each game play like a fantasy novel." This PC version is very faithful to the original, and allows you to play against up to 5 other human players. Although the game lacks any computer opponents, you can play solo against the clock. Coded in Java, Wizards is pretty to look at, and even includes many optional rules by the original game designers and others. Highly recommended for fans of fantasy boardgames. 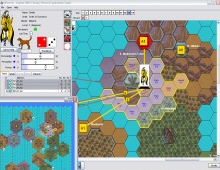